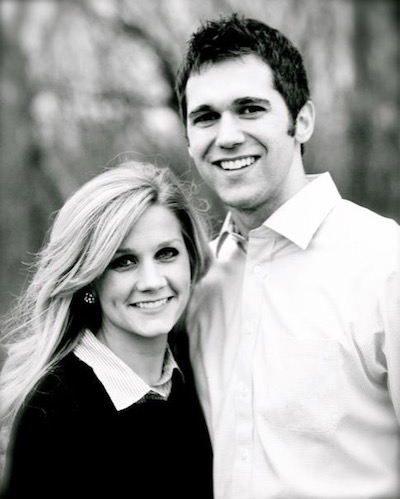 The two people who posed for the cover of Undeniably Yours and who shot the video used in the trailer are a real life couple! Their names are Jess and Scott and they’re one of the cutest husband/wife pairs I’ve ever seen. When I asked them if I could interview them, they graciously consented. Here’s what they had to say.

How did you meet one another?

We went to different colleges our freshman years, but Scott visited my (Jess’s) college one weekend and we were introduced by one of my roommates. Sad to say, the sparks did not fly at first. However, when Scott transferred to my school a year later, we started hanging out, and I guess the rest is history!

Can you tell me a bit about how Scott proposed?

Scott is quite a romantic. He had a special note put in my mailbox the day he proposed (a random Tuesday so I wouldn’t suspect anything) that invited me to a mutual friend’s art show. I didn’t think much of it, and I actually threw the piece of paper in the trash! Later that night, I begged Scott to skip the show because it was SO cold outside. He insisted that we go and support our friend, which I thought was really cute of him, so I reluctantly went. As we started walking through the art show, I realized that something seemed fishy because all the art work had something to do with our relationship! The theme was ‘Things We’re Thankful For,’ and at the last stop, he said the thing he was most thankful for was me! He then got down on one knee and pulled the ring from his sock where it had been hiding all night! And of course, I said yes!

How long have you been married? 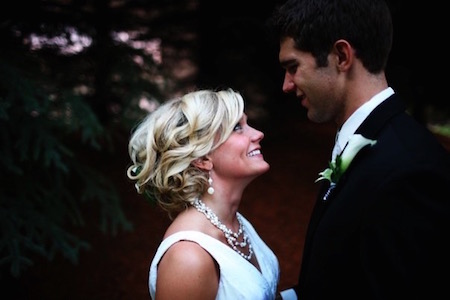 What kind of work do you both do?

Scott works as a physical therapist and Jess is a college recruiter.

How did it come about that you two (non-models, right?) found yourselves modeling for the cover of Undeniably Yours?

Well, we got an email from a friend who works for a publisher saying they were looking for a dark haired guy and blond girl for a photo shoot. Our friend wondered if we’d be willing. We were so honored to be asked and had no hesitation saying yes! I guess our hair got us the job!

Note from Becky: Jess and Scott’s friend is the fabulous Bethany House editor, Raela Shoenherr. Raela told me she knew they’d be perfect for the cover because they’re such a fun and photogenic couple. So long as they had each other, Raela felt they’d be comfortable in front of a camera. She was right!

When you think back to the day of the cover shoot, what memories stick out?

How nice the photo shoot team was! They were really encouraging and helpful since it was our first time modeling. Also, Scott can’t forget wearing the cowboy boots because of how comfortable they were! I think if it was up to him, he would have worn them home that day. He also said he loved the excuse to stare into my eyes. 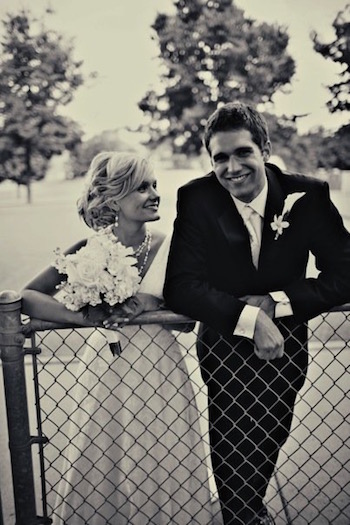 How did it feel to spend an afternoon as models?

When we left, we actually both looked at each other and said, ‘That was really tiring work!’ We thought it would be easy to stand and pose for pictures, but we wanted to make sure they got the perfect picture so we were really nervous! We both have a newfound respect for professional models! But, it was really fun to have the experience and pretty easy to be lovey-dovey since we’re still so in love!

Were your shoes pink, Jess?

No, they were actually beige! Ah the wonders of Photoshop, right?

What do you think of the finished cover?

We LOVE the final cover choice! That shot was actually a lot harder to get than it looks because we had to hold really still in the same pose for a couple of minutes, and I kept slipping out of his arms! It’s awesome that it turned out, and the lighting and setting are just perfect. We were thrilled to see how it all came together!

And now (just for fun) a quiz to see how similar you each are to the hero and heroine of Undeniably Yours….

Do you have any interest in thoroughbred horse racing?
Well, I’ve never really been a horse guy, so… not really.

Have you ever set foot in Texas?
Yes, one time I went there my sophomore year of college for a conference. Everyone seemed really nice and I LOVED Chick-fil-A!

Do you like Dr. Pepper?
On special occasions, I guess. I actually don’t drink a lot of pop.

Are you a fan of country music?
I’ll admit, I’m warming up to it, but I wouldn’t call myself a big fan… yet.

Do you come from a big family?
My immediate family isn’t too big, I come from a family of two parents and three kids (including myself). Jess has a way bigger family than I do.

Is there anything ‘cowboy’ about you? If so, what?
I think the only ‘cowboy’ thing about me is that I like to wear plaid and flannel shirts! Although I can say that I really enjoyed wearing the cowboy boots. So maybe there’s a place in my future for those.

Have you inherited a fortune lately from your oil tycoon father? 🙂 Oh man, wouldn’t that be awesome?! I guess until that happens we’ll have to stick to our day jobs and try picking up some more modeling gigs, right?

 Do you have a cat? I’m really allergic to cats, which is maybe for the better because I could see myself owning a lot of them if they didn’t give me such bad asthma!

We do have a dog, though! Her name is Doree which means “Golden” in French. France has a special place in our hearts because Scott visited me there when I was abroad, and he said “I love you” for the first time on top of the Eiffel Tower… {sigh} Like I said, he’s a romantic!

Any interest in art? I LOVE art! I wouldn’t say I’m that knowledgeable about it, but I have a deep appreciation for it and a great amount of respect for those who are artistic! I think my talent is in crafting more than art.

Are you an only child? No, I actually have two younger siblings! A brother and sister! I love to brag about them because they are pretty awesome

Are you a fan of bubble baths? To be honest, not so much. For some reason I just get antsy and can’t relax, which I think kind of defeats the purpose!

My sincere thanks to Scott and Jess! In my mind, you’re a perfect Meg and Bo and you did a fantastic job modeling for the cover and for the trailer. I’m grateful to you both!