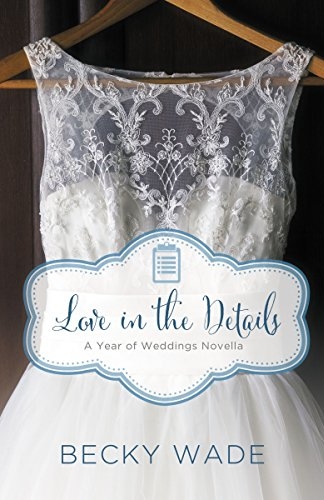 Love in the Details

Eight years have passed since Holly last saw her high school sweetheart Josh. Now the wedding of Josh’s best friend has brought Josh back to Martinsburg, Texas. His duties as best man and Holly’s as the church’s volunteer wedding coordinator link them together. As they work behind-the-scenes to plan a beautiful November wedding for their friends, they’re forced to confront painful reminders of what might have been.

Holly broke up with Josh all those years ago in an attempt to ensure his future success. However, she never told him the true reason behind her actions and now must decide whether to keep her secret hidden. She’s terrified of letting herself fall for him because she barely managed to piece her life back together after losing him the last time.

Not a day’s gone by since Josh parted from Holly that he hasn’t thought about her. The pain of the past eight years has been too much to bear and he doesn’t want to make himself vulnerable to her again. But the more time he spends with her, the harder it is to deny the love he still has for her.

Available wherever fine books are sold

You’ll love these two characters and will enjoy getting swept away into a story filled with faith, forgiveness, second chances and sweet romance.